What else is there to do on a boring winter evening but sit on the sofa with the hubby watching dvds? John and I are both big fans of British comedy, and we have recently begun watching our way through a few boxed sets we happened across, or got as gifts over the holidays.

The series we are presently watching is One Foot In The Grave. I used to watch this series long ago with my dad, after he would come home from work late at night on PBS. The main character Victor Meldrew always reminded me a bit of my grandpa with his ornery sense of humor, though grandpa didn’t have anywhere near his hypochondriac tendencies thankfully. 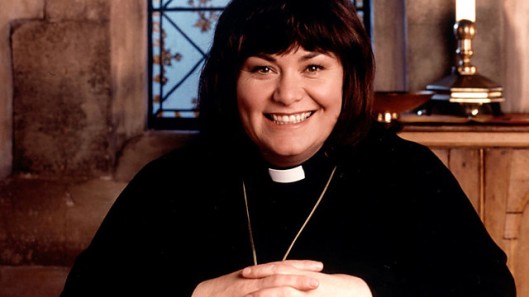 Another favorite Britcom of ours is Vicar Of Dibley. Hubby first showed me a few episodes of this series several months ago, and I instantly fell in love with it. It really is one of the funniest shows I have ever seen. I surprised him with the complete boxed set of the series as his Christmas present, because it was one thing that I knew for sure he would love and didn’t already own. (he’s not the easiest person on earth to shop for usually)

Yes I know most people would ask why we bother to buy the dvds when there is so much available for streaming online nowadays. I guess good tv series are like good music, if you like something enough, you really should invest in making shows a permanent part of your collection.

We don’t have cable television due to the monthly cost, but do get hours of enjoyment watching the shows and movies we have collected over time, and those we check out from the local library. In a way I have come to like not having cable, as only having discs to watch will give us a little more control over the sort of shows our son will be seeing growing up. (at least while he is at home)

We already have amassed quite a collection of good children’s movies and intend to expand it by the time he gets old enough to really pay attention to tv. John and I aren’t all anti-tv, but neither of us are really big fans of most of what is being passed off as children’s programming lately. We’ll be pretty careful what we let him watch, at least for quite awhile to come. Besides, a good hour or so watching shows on the sofa is ok, but we want him to know it is far better to play and to read than to spend all his time being a couch potato glued to a television screen.